Whilst drawing up levels I had a few ideas for some additional features in the game. So, this week I’ve been looking at adding those in to my test level. First up are breakable doors. These require a missile to impact them to destroy them, once destroyed subsequent missiles will pass through the opening created.… [Read More]

Just a few bug fixes to contend with this week. With the use of sequences in the game it was necessary for me to work out a way to save the state of each sequence so that, for example, the basement sequence once completed would load as completed when the game was restarted after that… [Read More]

This week I have turned my focus on to sketching up some new levels (8) for the game. I’m using graph paper for the moment as I just start creating a level and see where it takes me. This allows me to go through all the levels and put them in some sort of order… [Read More]

Slow progress for Reflex over the course of the last 2 weeks as I’ve been more focused on Asylum. But I have made some improvements. The automatic collision creation code I mentioned in the last post has now been finished and is working flawlessly. There was a nice bug that allowed the player to start… [Read More]

Things have a bit slow over the last couple for weeks for development as other RL stuff has been interrupting progress. I have been working through more of the development involving the first sequence. I needed to improve my state saving function to save important sequence information such as it’s playback state (paused or not)… [Read More] 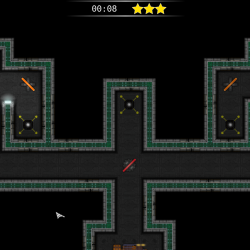 This week in the UK the weather has been very hot which restricts the amount of time I can bear being in my study. So, development on both titles has been a lot lower than usual. For Reflex there was a small bug fix session to correct an issue with the rotateable reflector, and also… [Read More]

This week in the UK the weather has been very hot which restricts the amount of time I can bear being in my study. So, development on both titles has been a lot lower than usual. For Asylum I have been focusing on the first ‘Sequence’ needed for the game that involves a Police officer.… [Read More]

Lots of tweaks and additions this week. Tutorials that are displayed before playing the active level can now be device dependant. This is a change I made when a friend of mine was playing an early build on my Android tablet and he seemed confused when the instructions for panning the screen starts mentioning the… [Read More]

After last weeks fumbling around with sequences this work was a bit more productive. First up, the police. Originally the police sprites were from a static game resource and although they looked great they were going to prove problematic when it came to doing anything other than walking and pointing a gun at someone. So,… [Read More]

With a new week came a new Beta that fixed the YYC native compiler in GMS 2.3 Beta. So, I was able to fully compile Reflex and run it at full speed on Android. Everything is looking really good. One important change is the way movements are calculated, originally they all used the usual frame… [Read More]