So, the release process of Reflex on Google Play didn’t go as planned. It appears that there was a credential miss-match and that prevents the game from starting everywhere except on my devices – which isn’t helpful. While I resolve the issue I have unpublished the game from the store. Please bear with me; this… [Read More]

Today is the day. After almost 2 years of development, Reflex is now available for purchase on Steam. The game, as previously mentioned, is currently under the Early Access label. This means that the game is still in development and the current release contains 53 levels. Another 49 levels will be released during the first… [Read More]

Test and test again. This week continues the massive testing of every level of worlds 1, 2 and 3 to make sure everything is up to scratch for the Steam Early Access launch on December 1st. I uploaded the first YYC (native) compile of Reflex to the Steamworks Pipe to ensure that installation on a… [Read More]

After the last two weeks of real life distractions I’m back on Asylum development. I’ve realised that the final basement part will require a feature that GameMaker Studio 2 doesn’t have at the moment, however it should be dropping in the last quarter of this year, which means there shouldn’t be a long wait now.… [Read More]

I’m taking a little breather in development so that I can work out what comes next and draw up the next environments ready for inclusion in the game. The basement area is the most complicated I’ve put together so far and I need to do one or two more things to complete it but they… [Read More]

This weekend the temperature in the UK has hit a crazy 32 degrees (centigrade) and so working on Asylum was reduced to avoid overheating. What I have managed to do, however, is to finish off the pause menu for now. If the player presses ESC the options screen is shown by default, which contains the… [Read More] 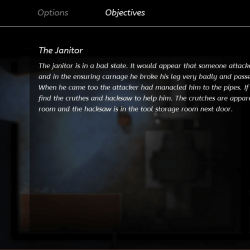 Continuing from last week I’ve been working on the UI elements. With the objectives display being moved from the game view to the objectives screen there was no longer a visual cue for when an objective had been completed. So, I’ve added in an additional notification so the player knows which task has been finished.… [Read More] 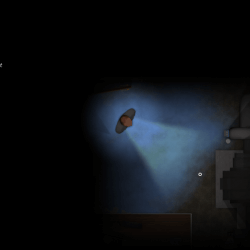 The last 2 days I’ve been continuing the work on the main basement quest line. This is now complete. As previously mentioned it involved quite a few different stages that the player needs to complete in order to potentially restore lighting to the building. One of the ‘issues’ with GMS2 is that instance numbers can… [Read More]

It’s been a while, I know. The part of the game I’m currently working on involves a lot of very complicated sequences. The player has to do about 5 different things in a relatively set order and for each of those elements I have to save the state in case the player fails, quits or… [Read More]

For the last couple of weeks I’ve been putting in to place the start of what is quite a complex series of events. There is a section of the game where the environment is flooding. This is triggered invisibly by the player (to ensure the character is in the right place at the right time).… [Read More]