The first confrontation with the police is supposed to result in the player escaping into the basement. Because of this the police need to be persuaded to stop their pursuit. So, I revised the sequence so that once the player is down in the basement other things take place to remove the heat from Jack… [Read More]

Progress at last. After 2 weeks of trying to work out the cause of a bug that results in a black screen when the player returns from the Flashback sequence I have final found the cause and corrected it. After a lot of debugging I discovered that the Bloom Shader that is used to give… [Read More]

Well, 2019 isn’t going well. Slightly shorter development sessions this weekend due to other commitments. I’ve had another investigation into the black screen issue I’m experiencing that only occurs when the player moves from the flashback scene back to the first floor. I am still unable to isolate the issue. It’s very frustrating because even… [Read More] 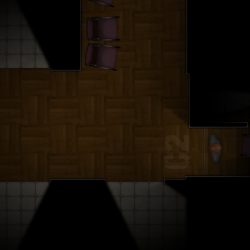 This week I thought I’d turn my attention to adding a bit more detail into the environment. Starting with chairs, stairs and floor signage. The first strange thing that occurred however was the dialogue system failing for apparently no reason. I discovered the bug whilst I was adding a few more dialogue sequences. The first… [Read More]