And now for something completely different

I’ve been wanting to make a start on a couple of small side projects for a while. I have some great ideas for a few 2D games. One of which is a revamped up to date version of Reflex (a puzzle game).

So with that in mind I’ve been experimenting with different engines to see which one will allow me to develop the games the easiest.

I started off with Unity 3D and going through some of the 2D tutorials, to be honest I’m finding Unity 3D to be a bit of a sledgehammer when it comes to developing smaller games; and that’s why I’ve been looking elsewhere.

I had a quick look at Clickteams Fusion, but didn’t like how it felt. Then I had a look at YoYo’s GameMaker Studio and found the interface to be really ugly and uninviting, the pricing policy didn’t help either. I already have a licence for TheGameCreators AGK (1 and 2) but with a puzzle game it is a lot easier if the environment is more visual. So, I’ve been playing around with Scirra’s Construct2, a visual programming environment that exports to HTML5, Android, iOS, Windows, Mac, Linux, Ouya, Amazon Kindle, and more besides.

So far I’m rather impressed with the engine and have started to play around with some tile-mapping and lighting to see what it can do. 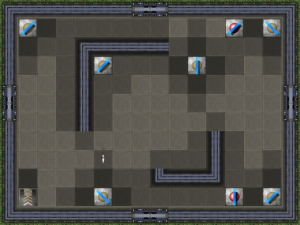 Not much to look at I know but it’s a start. It’s basically a 64×64 pixel grid at a resolution of 1024×768 with 2 layers (at present), the background and the walls. The shadows are dynamically created from an invisible lightsource that I’ve placed near the middle.